When you buy an affordable touch screen monitor, or even multiple monitors, you’re going to need to make sure that you’re ready to deploy the system, and that means getting a proper POS operating system. Sure, the monitors are inexpensive and getting them set up is a matter of ease, but a good POS system is their lifeblood, and the lifeblood of your checkout system. So what features should you be looking for in a POS system after you purchase a reliable touch screen monitor? It’s actually pretty simple and we’re going to go over a few things that you should be expecting.

You want your new POS system to be easy to use, there’s no question about it, and this is one of the biggest things that people tend to overlook when they are shopping. Here’s the thing: the more time you spend learning to use the system, and the more time you spend training employees, the more money you’re going to end up losing, and that’s just not acceptable. Get a system that works well, and one that you can start using right off the bat.

We can’t say it enough: choose a POS system that is well supported by the developer. There are cheap systems out there that do the job for a time, but once something goes wrong, you won’t be able to contact the developer or vendor for support – this is not something that you want to have happen to you. You need to have support, and you need to make sure that it is consistently available. Additionally, if there are updated, you want access to them as soon as they are released. There are some POS systems that charge for updates, and this will become a bit of a money hole as time goes on.

Welcome to the 21st century! This is a great time when your software does not necessarily need to be installed on very single POS system you have. There are many pieces of POS software that can be installed on a central server and accessed with each terminal via an account system that allows each employee to log in. This type of system will work well and will be very fast for your employees. 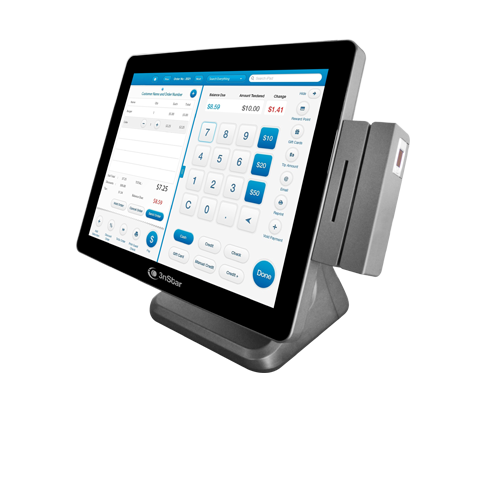 The final point we want to cover is cost. There are some POS systems that can be bought outright for thousands of dollars and then there are those that can be rented for a set amount of money each month. Generally speaking you’ll pay about $50 per month for a POS system, which isn’t bad if you’re a retail establishment and can afford it. If you are a smaller operation however, you might have a hard time coming up with the cash and with that being the case, we always tend to recommend finding a POS system that you can buy outright.

Now in that vein, you’re likely going to run into systems that make use of a tier system, meaning the more you pay, the more features you’re going to have. You may also run into systems for the best touch screen monitor devices that use a modular model, meaning you will be able to plug new features in individually by paying for each one. Whether or not this is a good system will depend on your preferences and your needs, so make sure you think about it long and hard before you commit to something like that. Sometimes, the ability to add parts onto your system can be extremely beneficial!

Get Equipped, Get Installed

A touch screen system is a great addition for any business so long as you happen to have everything you need to get started. Now would be a great time to take a look at the different syste4ms and make sure you’re ready to set yourself up and serve your customers properly.

About the Author: Elias Botbol